Everywhere you look these days is: LONDA, LONDA, LONDA. Londa (pronounced ‘loan-dah’) is the Lugandan word for VOTE. The focus of Uganda’s attention is exclusively on the upcoming Elections scheduled this upcoming week on February 18th. There will be several offices voted… 385 Members of Ugandan Parliament from each of the 111 Districts, Local Council Members of various ranks from the smaller neighborhood positions to the larger district levels, City Mayors of larger townships (like Kampala), and of course, Uganda’s President.

There are 29 registered political parties in Uganda, including the more popular National Resistance Movement, Forum of Democratic Change, Democratic Party, Uganda’s People Congress, Conservative Party, Justice Forum, and Independents. For the past 30 years President Yoweri Museveni and his supporting political party, NRM, has held majority power within all Executive branches of government.

This year there are 8 Presidential candidates campaigning for Uganda’s highest office. However, 3 candidates are considered the front-runners. President Museveni is seeking re-election for another term. Museveni’s former (or fired) Prime Minister, Amama Mbabazi, has decided to make his own independent run. As well as Dr. Kizza Besigye, who was the former Medical Doctor of President Museveni. This will be Besigye’s 4th time to run against Museveni’s ticket. The relationship between these 3 men dates back over 30 years during their military days when they jointly fought for control Uganda’s government. Their debates, media reports, and campaign speeches contain tangible ebbing of their personal conflicts and previous misunderstandings. It has gotten pretty nasty.

Campaign posters decorate every possible surface… business store-fronts, any flat surface like walls, security gates, utility poles, vehicles sides and windows. One interesting thing that I failed to notice during the last elections was the usage of symbols prominently displayed on all posters. To support to illiteracy rate of 27% in Uganda, each political party has a symbol (like a key, hoe, soccer ball, clock, chair). The actual voting ballot will then have printed the candidate’s name, political party affiliation, and this specific symbol.

Schools were originally schedule to report back for the beginning of the academic year on February 1st. Due to the significance of this election and the possible volatility that could ensue, schools have postponed their opening date until February 22nd. Those students over the age of 18 years and teaching staff can now more easily remain in their home district to cast their vote!

Let us all lift up the nation of Uganda together this month… Please specifically pray for safe, fair elections followed by acceptance and peace for the nation to move forward. 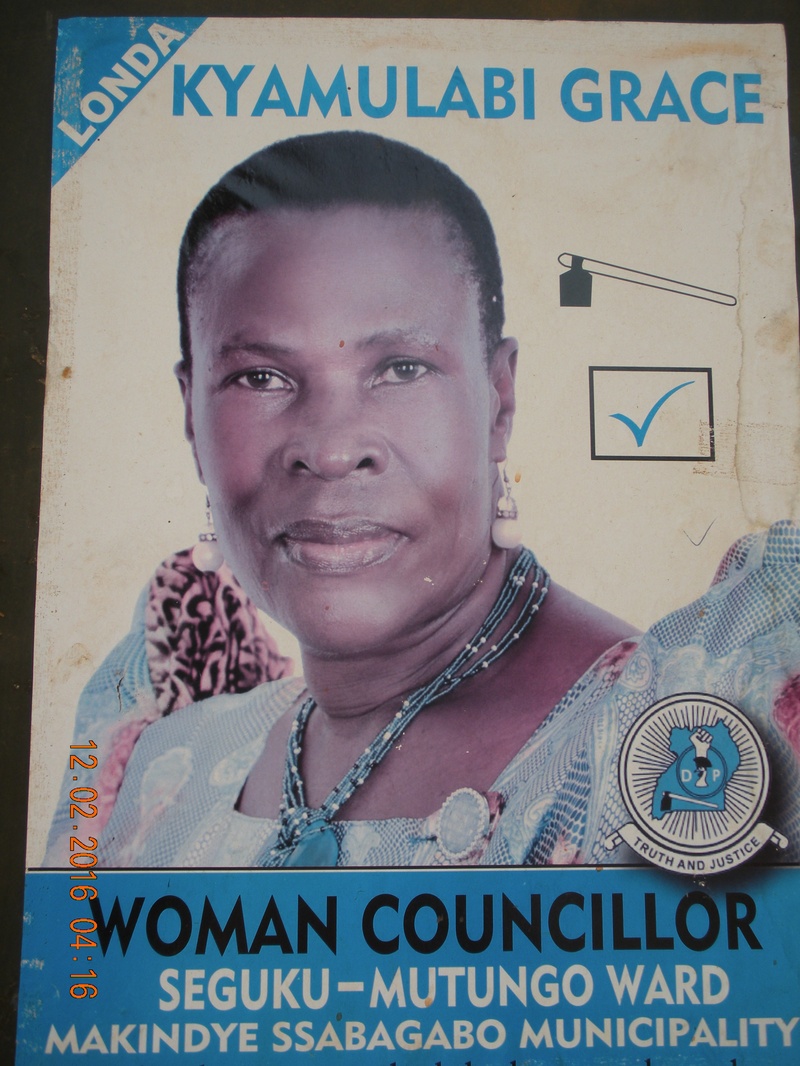 This Madam is a neighbor to SMK running for office.