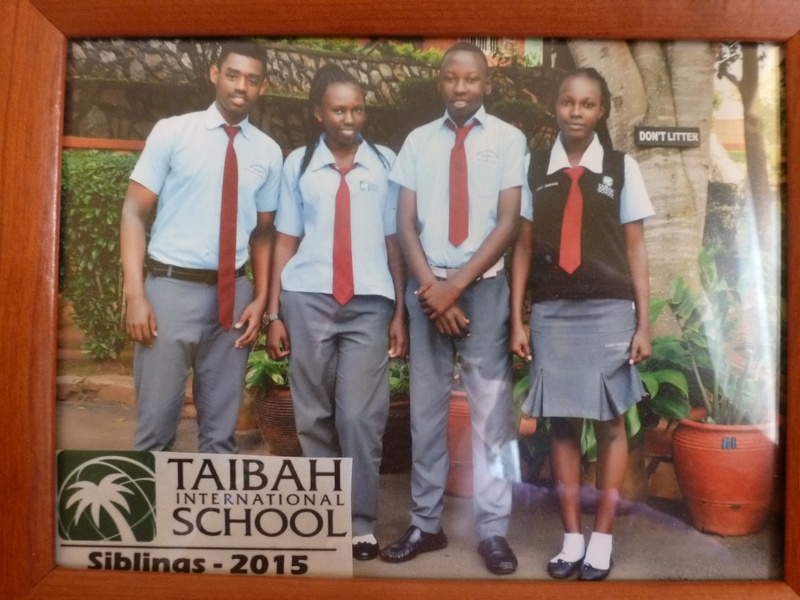 One of the things I really love about St. Mary Kevin Children’s Home is the sense of family. Kids have not come together under the best of circumstances, but there is a strong bond formed from the understanding and compassion of each other’s misfortunes. Mama Rosemary has stongly instilled a sense of family and loyalty amongst the children. Most of CTT’s sponsored Secondary students have literally grown up together.

This term at Taibah International School, they profiled the various sibling groups attending Taibah. The school really prides itself at having several family groups that have moved from their Primary through Secondary schools. Antwain has been a student at Taibah since end of Primary 5. He has had positive experiences in both schools.

In the front office this past term, ‘The Mosher Family’ was amongst those siblings groups profiled. I could not help but have a pride in seeing this photo. Francis was Antwain’s first friend at SMK, and he has been the best friend and influence imaginable. Isabella is my Ugandan daughter, and she and Antwain truly have that protective, yet feisty sibling relationship. Rebecca is the calming and reasonable presence in the group. They look after one another at school, as well as respect individual personality quirks and the need for one’s space.

At the end of Term 2, Taibah administration gifted these sibling photos to parents. I happily received mine, which is proudly displayed in our Sitting Room for all to see. Proud of these kiddos!!

Although I have received strict instructions from Antwain about what I can/cannot share about him on this blog, I have to share this little nugget. This term, Antwain (known as his middle name, Christopher, at school) was featured in Taibah’s Term 2 newsletter. He was one of the football (or soccer) players during their inter-house sports competitions. When Antwain arrived in Uganda, he was a snobbish American football fan. He would literally tell the boys that ‘real football’ was American football. Over the years, his tune has changed. With his participation at Taibah and friendly matches with other boys during holidays, he has really developed his skills. He even has aspirations of playing Ugandan football when he moves back to America for college. Love to see this passion emerge within him!