Yet another love that I have to share with you from Gloria's blog... Gloria's desciption of Saka is PERFECT!! 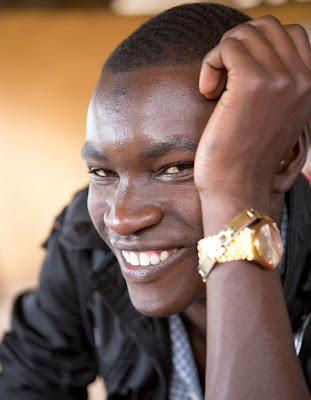 Nsubuga Saka is a good-looking young man who is very quiet and shy. That is, until you get to know him. Turns out this kid has a wonderful sense of sarcasm and humor, and he absolutely loves to be with people and make them laugh! He is confident, caring and playful - a loyal friend and (like Henry) a terrific role model for the younger children. Knowing Saka all these years has been like unwrapping a beautifully packaged gift. Slowly but surely, the treasure inside has emerged.

Saka has been working hard in vocational school and is now in his final semester at Buganda Royal Institute of Business and Technical Education. This June he will obtain his Certificate of Accounting. Saka is a half-orphan who has been a member of SMK's community since Primary 2. He was one of the first students sponsored by CTT in 2007. Upon his graduation, he will join the business work force. He hopes to work in one of Uganda’s banks.

Saka shared that CTT sponsorship not only provided an educational opportunity, but a way of honoring his late father. “My father was an accountant before he died. People working in banks look so smart, so confident. When I think of working of a bank, I think my father would be very proud of me. CTT provided me with an education that I did not think I would ever have. Now I have hope for my future. I will be a good man, like my father. Thank you CTT.”

Congratulations to yet another successful CTT sponsored student. It has taken a village, and we are proud to be a very big part of it!

For Gloria's full blog on Saka, check it out at http://gloriainafrica.blogspot.com/